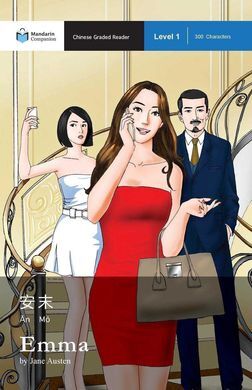 Clever, rich, and single, the beautiful ?n M? (Emma Woodhouse) is focused on her career as fashion designer in the glamor of 21st-century Shanghai. She sees no need for romance in her life, but when she tries to find a boyfriend for her new friend Fangfang (Harriet), her carefully laid plans being to unravel. As she ignores the warnings of her good friend Shi Wenzheng (Mr. Knightley), her decisions bring consequences that she never expected. With its witty and charming characters, Emma is often seen as Jane Austen?s most flawless work.Mandarin Companion is a series of easy-to-read novels in Chinese that are fun to read and proven to accelerate language learning. Every book in the Mandarin Companion series is carefully written to use characters, words, and grammar that a learner is likely to know.Level 1 is intended for Chinese learners at an upper-elementary level. Most learners will be able to approach this book after one to two years of formal study, depending on the learner and program. This series is designed to combine simplicity of characters with an easy-to-understand storyline which helps learners to