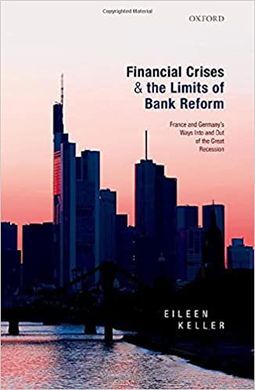 FINANCIAL CRISES AND THE LIMITS OF BANK REFORM

Financial Crises and the Limits of Bank Reform examines the responses that were implemented in France and Germany, two comparable European economies, in the aftermath of the global financial crisis from 2007/2008 with respect to the future economic role of the banks. While France pushed for greater independence from the banks by strengthening financial disintermediation and non-bank intermediation, Germany supported classic bank intermediation.

Analysing the reasons for this puzzling difference, this book shows that the main lessons drawn from the crisis were the consequence of differing patterns of social learning, leading to changes in widely shared beliefs of specific aspects of banking. While these were related to the conditions of bank lending and the limits of bank intermediation in France, in Germany they were linked to the risks of financial innovation and financial sector concentration.

The book draws on an in-depth analysis of French and German banking and financial sector reforms in the decades prior to the crisis, crisis management, and the responses implemented in the aftermath, featuring extensive interview data with over 70 professionals in addition to profound document and data analysis. It discusses alternative theoretical approaches and spells out the ontological foundations and behavioural implications of the social learning approach to policy change.

Contrary to other accounts of the post-crisis reforms concentrating on regulatory change, the author focuses on how evolving financial practices and reform priorities mutually condition each other over time, forming distinctive developmental paths. As this book shows, it is only once we embed the reform options chosen in their specific institutional and socio-economic context that we fully understand the driving forces behind the post-crisis reforms.