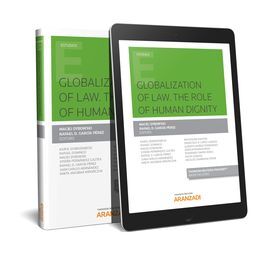 GLOBALIZATION OF LAW. THE ROLE OF HUMAN DIGNITY (PAPEL + E-BOOK)

The authors of "Globalization of Law. The Role of Human Dignity" want to address the challenges and problems arising from current globalization processes in the realm of legal regulation. Some of these problems are philosophical and theoretical in nature, some are utterly practical. The distinct feature of this volume is philosophical consensus among the contributing authors contributing to the present volume. This consensus is built around dignity of a human person and its legal relevance in an increasingly globalized world. It is the person endowed with inherent dignity, seen from the various angles, that encapsulates the hopes for solutions to problems arising from the phenomena referred to as globalization of law.