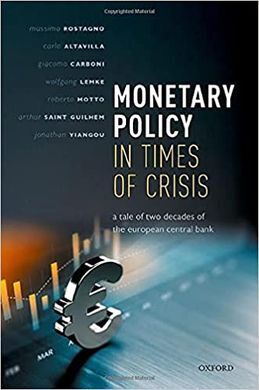 MONETARY POLICY IN TIMES OF CRISIS. A TALE OF TWO DECADES OF THE EUROPEAN CENTRAL BANK

The first twenty years of the European Central Bank (ECB) offer a clear demonstration of how a central bank can navigate macroeconomic insecurity and crisis. As the global economy moves into a new phase of unheralded uncertainty, the story of the ECB holds multiple lessons of wider significance for the central banking community and researchers of monetary policy.

This volume provides a unique account of how the ECB has reacted to the challenges confronting the euro area through its monetary policy, turning to innovative measures and unprecedented policy actions to fend off the various threats posed by the global financial turmoil of 2007/08, the euro area sovereign debt market crisis, and the subsequent period of anaemic growth and deflationary pressures.

It also addresses some of the criticisms the ECB has faced regarding its policy initiatives. It identifies the ultimate motivation behind the ECB's cautious attitude in the early phases of the financial crisis, and its peculiar definition of price stability and attention for credit creation, as well as addressing the criticism that central banks were fundamentally unprepared to head off a major financial cataclysm as they were wedded to a deficient economic paradigm which made them blind to financial risks. It also shows that the ECB's unconventional low-interest policies have not compromised the position of financial intermediaries in the way commentators initially predicted they would.

By condensing the facts and lessons of the first 20 years of the ECB, this volume will acquaint the reader with the structures and decision-making processes behind the complex, often controversial, crisis measures that were taken during some of the toughest economic challenges in the history of modern Europe, and provide them with fresh ex-post analysis on their effect on the real economy and inflation.