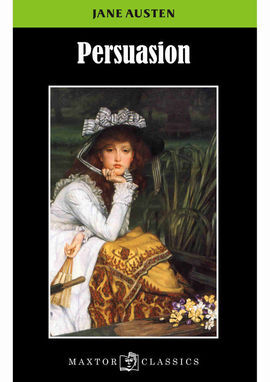 "Sir Walter Elliot, of Kellynch Hall, in Somersetshire, was a man who, for his own amusement, never took up any book but the Baronetage; there he found occupation for an idle hour, and consolation in a distressed one..."

Persuasion is Jane Austen's last completed novel, published posthumously. She began it soon after she had finished Emma and completed it in August 1816.

As the Napoleonic Wars come to an end in 1814, Admirals and Captains of the Royal Navy are put ashore, their work done. Anne Elliot meets Captain Frederick Wentworth after seven years, by the chance of his sister and brother-in-law renting her father's estate, while she stays for a few months with her married sister, living nearby. They fell in love the first time, but she broke off the engagement.

Besides the theme of persuasion, the novel evokes other topics, with which Austen was familiar: the Royal Navy, in which two of Jane Austen's brothers rose to the rank of admiral; and the superficial social life of Bath. It is portrayed extensively and serves as a setting for the second half of Persuasion.

PRIDE AND PREJUDICE B2.2 +CD