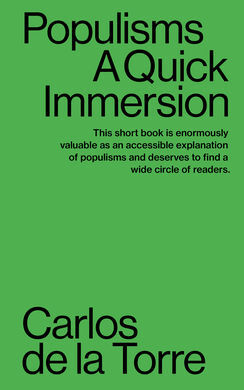 Populisms a Quick Immersion analyzes populism globally and through the lens of Latin America, where populists have governed since the 1930s and 1940s up to the present. When populism is analyzed globally, the novelty is not its presence in most regions of the world. After all, populists have challenged the power of political and economic elites since the nineteenth century, and the first self-described Populist Party was formed in the U.S. in 1891. What is new is that populists are in office not only in Venezuela, Bolivia, the Philippines and Turkey but also in the U.S. as well as other consolidated Western liberal democracies like Italy. By learning from the experiences of populism in the global south, citizens, activists, journalists and politicians in the global north might avoid making the same mistakes when dealing with populists in power.