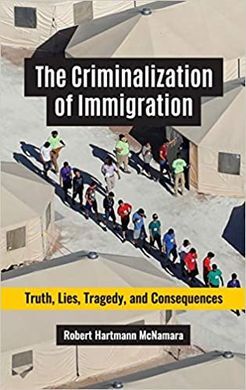 THE CRIMINALIZATION OF IMMIGRATION

Presents the history of immigration to the United States; its criminalization under the Trump administration; debates over criminalization; effects on immigrants, U.S. residents, and the U.S. economy; and this country's relationships with other nations. This book offers a comprehensive understanding of past and current immigration policy in the United States and exposes falsehoods in the rhetoric and narrative portraying Latino and Mexican immigrants in the United States. Much support for intensified immigration enforcement and deportation is based on repeated statements by federal officials, including the U.S. president, that immigrants pose a threat to national security, contribute to crime, and take jobs away from native-born residents. The evidence has consistently concluded that these narratives are inaccurate. This text examines white nationalism as a backdrop to understanding the rationale behind current immigration policy and tactics. It examines how political and economic factors, broadly defined as neoliberal policies, shape the immigration narrative. It addresses the criminal justice system's applicability to immigration, law enforcement efforts, problems with immigration courts and judges, and how the detention of immigrants is part of a larger mass incarceration of people of color. Finally, the text offers insight into the reasons for massive migration, with the United States contributing to the problem by supporting regimes that endorse or allow humanitarian crisis. Separates fact from fiction regarding immigration problems and threats Presents a history of immigration to the United States and contrasts past federal approaches with procedures launched by the Trump administration Explains facts produced in research that are ignored by federal authorities pushing mistruths about immigrants Examines the issues and problems with immigration courts and judges, and law enforcement, and shows how the immigrant detention process is part of a larger mass incarceration of people of color in the United States Details the effects on immigrants, U.S. residents, the U.S. economy, and our relationship with other nations Shows how the U.S. itself is at fault for helping to create conditions that spur massive migration