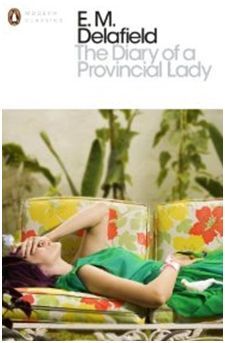 THE DIARY OF A PROVINCIAL LADY

It's not easy being a Provincial Lady in Devonshire in the 1920s, juggling a grumpy husband, mischievous children and a host of domestic dilemmas - from rice mould to a petulant cook. But this Provincial Lady will not be defeated; not by wayward flower bulbs, not by unexpected houseguests, not even by the Blitz. She will continue to preside over the W.I., endure rain-drenched family picnics and succeed as a published author, all the while tending to her strawberries.
The Diary of a Provincial Lady is a brilliantly observed comic novel, as funny and fresh today as when it was first written.
Widely regarded as one of the funniest English authors and an heir to Jane Austen, E.M. Delafield was born in Sussex in 1890. She took the name Delafield to distinguish herself from her mother (De la Pasture), also a novelist, and wrote over 30 books which could be 'as laugh-out-loud funny as PG Wodehouse' before her death in 1943.

THE DIARY OF A PROVINCIAL LADY