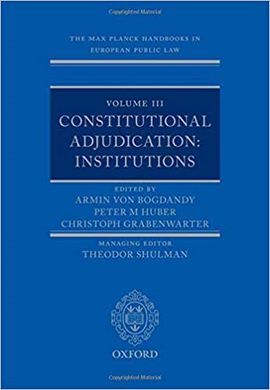 The first volume of the series began this enterprise with an appraisal of the evolution of the state and its administration, offering both cross-cutting contributions and specific country reports. The third volume (the second in chronological terms) continues this approach with an in-depth appraisal of constitutional adjudication in various and diverse European countries. Fourteen country reports and two cross-cutting contributions investigate the antecedents, foundations, organization, procedure, and outlook of constitutional adjudicators throughout the Continent. They include countries with powerful constitutional courts, jurisdictions with traditional supreme courts, and states with small institutions and limited ex ante review. In keeping with the focus on a diverse but unified legal space, each report also details how its institution fits into the broader association of constitutional courts that, through dialogue and conflict, brings to fruition the European legal space. Together, the chapters of this volume provide a strong and diverse foundation for this dialogue to flourish.

THE MAX PLANCK HANDBOOKS IN EUROPEAN PUBLIC LAW. VOL.1: THE ...