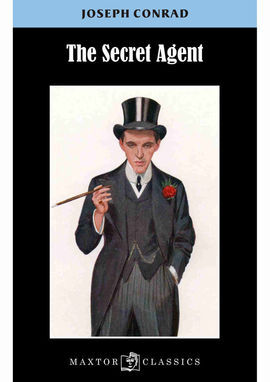 The Secret Agent is a novel by Joseph Conrad, published in 1907. The story is set in London in 1886 and deals with Mr. Verloc and his work as a spy for an unnamed country (presumably Russia). The Secret Agent is notable for being one of Conrad's later political novels in which he moved away from his former tales of seafaring.

The novel deals broadly with anarchism, espionage and terrorism. It also deals with exploitation of the vulnerable, particularly in Verloc's relationship with his brother-in-law Stevie, who has an intellectual disability.

The novel begins in Verloc's home, as he and his wife discuss the trivialities of everyday life, which introduces the reader to Verloc's family. Soon after, Verloc leaves to meet Mr. Vladimir, the new First Secretary in the embassy of a foreign country.