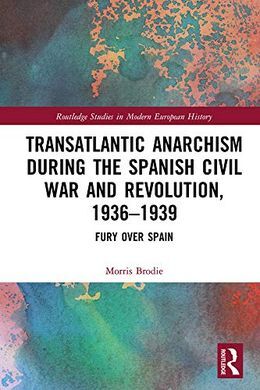 TRANSATLANTIC ANARCHISM DURING THE SPANISH CIVIL WAR AND REVOLUTION, 1936-1939. FURY OVER SPAIN

Between 1936 and 1939, the Spanish Civil War showcased anarchism to the world. News of the revolution in Spain energised a moribund international anarchist movement, and activists from across the globe ?ocked to Spain to ?ght against fascism and build the revolution behind the front lines. Those that stayed at home set up groups and newspapers to send money, weapons and solidarity to their Spanish comrades. This book charts this little-known phenomenon through a transnational case study of anarchists from Britain, Ireland and the United States, using a thematic approach to place their efforts in the wider context of the civil war, the anarchist movement and the international left.